Proud to sing my Countries anthem

I have been honoured to previously sing the British National Anthem at the start of some ice hockey games in Milton Keynes.

I was asked to sing for a couple of special, packed out, crowds for the local (at the time Elite league now NIHL) team ‘MK Lightning’ who play at Milton Keynes Planet Ice.

At the end of the season I was asked to sing the national anthem for the inaugural ‘Puck Aid’ which saw proffessional players from all over come together to play a North vs South game raising money for The Sports Traider Charity. I was stood with charity founder Lance Haggith and the then Mayor of Milton Keynes.

The event raised over £20,000 for the charity which is a youth-focused charity offering youngsters the kit and support they need to discover and fulfill their sporting ambition and potential.

I hope to sing the National Anthem at more sporting events in the future as I truly find it an honour to be a part of the atmosphere that opens the game and sing my Countries Anthem. 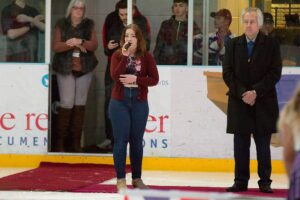 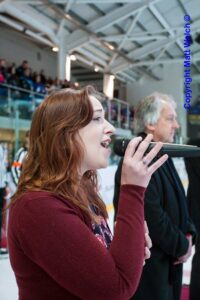